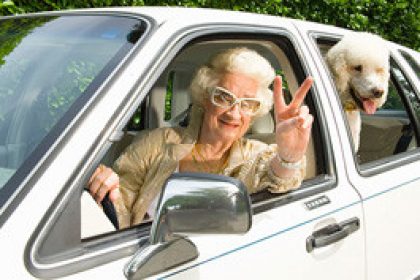 When it comes to seniors behind the wheel, having a pet there with them can be great company but it has been shown that those elderly people that have a pet in the car when they drive are more likely to have an accident compared to those people that never drive with their pet in the car. This was proven through different research and studies that have been conducted.

Those that had pets that they drove with was a common thing for them and they would take them just about anywhere. The pets would be in the passenger seat right up front next to the driver or sitting in the back seat. The studies that were conducted on these drivers were close to the studies that were done with those drivers that sometimes brought their pets along with them in the car. More than half of all drivers, regardless of their age, took their pets with them at least some of the time when they are driving around.

Over 80 percent of the people surveyed states that they knew that having an unrestrained pet in the vehicle with them was dangerous when the vehicle was moving. Only over 15 percent of them use a restraint system for their pets while driving, even while knowing that it was dangerous to not restrain them. Those elderly drivers found that their pets were a heavy distraction on their driving and this was something that was to be taken into caution since it can increase the dangers of being on the road. It should increase driver awareness to know these facts when it comes to having anyone drive with their pet in the vehicle.

There is no supporting or strong evidence that shows that anyone driving with a pet is a threat to any type of public safety. However, there is indirect evidence that shows that they can be distracting to the driver in the vehicle and should have their pet harnessed someway while in the vehicle driving around since this is a danger to the driver and to the pet riding around with them. There have been crashes and fatalities that involved having a driver distracted by their pet that was also in the vehicle at the time of the accident.