Scary Facts You Should Know About Distracted Driving 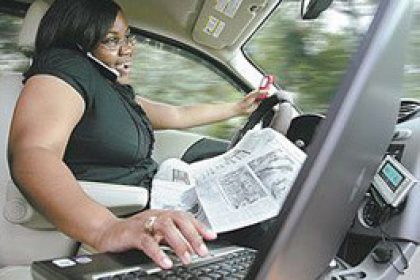 Distracted driving is something that so many kids do, so many adults do and something that shouldn’t be done at all. The scary realization is that many people do not look into the facts that come with distracted driving and what it can do to a person. Whether they were the ones distracted or someone else was, they need to make sure that they are ready to move forward with the drive ahead and not have anything to work about.

There is scary math out there that you can check into. This math is going to give you an idea of what exactly you’re looking at when it comes to distracted driving and the path of destruction it is causing throughout the United States today.

In 2013, 3,328 people were killed in distracted driving accidents. This was one year and this was not just injured, or had a small fender bender. These are people that had their lives taken away from them because of their distracted driving, or because of someone else’s.

A man recently received just six months behind bars after he hit a cyclist going down the street. Six months! The cyclist ended up dying and losing because of the person not watching or paying attention where they were going.

Some states allow the drivers to still be able to do things while on their phone, as long as it is hands free and they are not looking at the screen. While this might be something that is not against the law; it is something that does not guarantee that you’re not going to crash. If you want to do the safest thing possible – put down the phone, put it out of sight and out of reach. This is the only way you’re going to know that you’re not the cause of an accident while on the road.

Keep in mind that stopping at a stoplight counts too! You cannot whip out your phone while you’re at a stoplight, you have to remain focused on the road ahead of you and not on your phone. These count and you can get a ticket if found.

One game you can play, the next time you’re out driving around, is to have your passengers count the number of people that they see on their phones while you’re driving about. Make sure your eyes are on the road but have them keep track and tally out who is actually on their phone and who is paying attention.

You may be surprised by the numbers!