What Does a Movie Producer Do?

By Jordan Fabel •  Updated: November 1, 2021  •  8 min read  •  Creative
Approved Course is reader-supported. If you buy through links on our site, we may earn a small commission.

Are you a self-proclaimed movie buff?

Do you track Blockbuster release dates, watch the director-cuts, and know every famous quote ever uttered?

If so, a career in the movie and production industry seems like a perfect fit.

From actors and set designers to directors, there are countless jobs available. But the real question is, what does a movie producer do?

Arguably the most important person on a movie set, movie producer jobs are fast-paced, highly acclaimed, and insanely rewarding.

Pull up your director’s chair, and let’s take a closer look at how to become a movie producer and if you have what it takes! 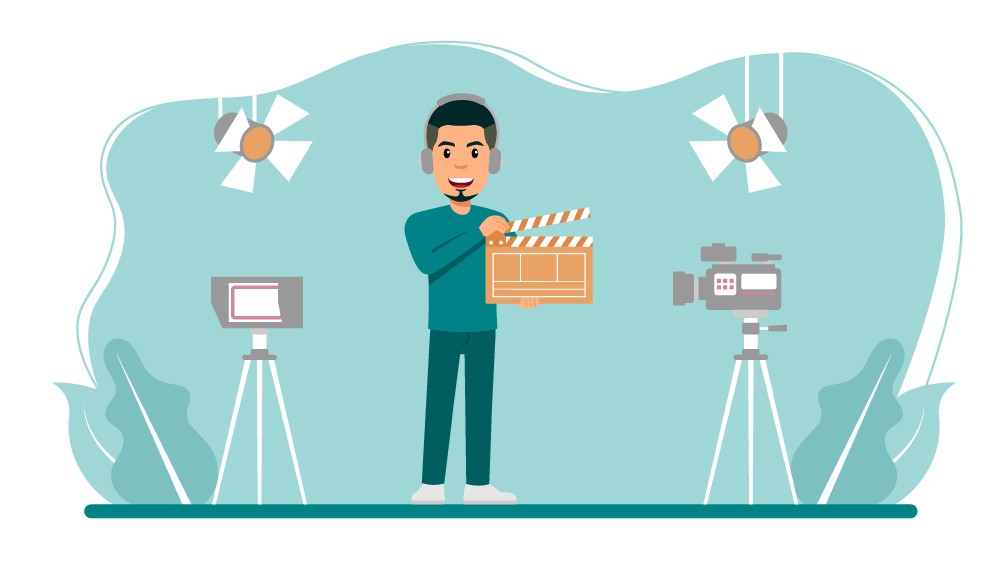 A movie is nothing without its producer. This person is responsible for launching the entire project, from hiring writers, directors, and actors to financing the film and building the creative team.

Movie producers oversee all steps in the production process from pre-production to post-production, all the way to the release date.

Some producers are self-employed, while others work for a studio or production company. It’s not uncommon for films and other productions to have multiple producers.

The person who provides financial backing for the film may ask for the title of “producer” without ever stepping foot on set. Other producers work hands-on from start to finish.

Movie producer job descriptions aren’t all created equal. Here are a few of the most common types of producers and their roles in the movie production process.

The title of producer describes anyone who works on set and oversees the project’s logistics. Most producers work closely with the director of the film.

Executive producers provide financial backing for major films and productions. In addition, they provide a considerable amount of their own money to support the project.

In turn, they get credit. Executive producers are involved in all financial aspects of the film, including accounting and other legalities.

If creativity is your forté, the role of a creative producer might be right for you. These producers work closely with the director on all artistic aspects of the film.

Creative producers assist with hiring talent, overseeing script revisions, relaying the director’s notes, and communicating between departments on and off the set.

When it comes to keeping a film on budget and schedule, line producers do it all.

Line producers create the film’s budget based on the script. They estimate the production timeline, create schedules for the various departments and handle all HR issues.

Not all filming happens on-set. Field producers coordinate any production that occurs at a non-studio location. They work closely with the head producer to ensure the footage is seamless and accurate.

Many movies depend on fundraising for financial backing. Associate producers help find and sign donors.

They also work closely with the lead producer, sharing duties and overseeing specific areas of production.

After investing so much time and money into a film, movie producers need to drum up interest. That’s where an impact producer comes into play.

Impact producers are also known as engagement strategists and are in charge of the movie’s marketing and distribution. It’s their job to advertise the film and secure press and media coverage.

Being a movie producer is a lot of work, but it’s also extremely rewarding to see your vision come to life on-screen.

From the announcement date to its release, a film takes about 2 years to complete. As a movie producer, your job starts the minute the concept is created and extends all the way to the release date — and sometimes beyond.

Here are the responsibilities and tasks you can expect when pursuing movie producer jobs.

Movie producers are the first ones to get the ball rolling on a film. The first step is to find financial funding. Without money, your project will be at a standstill.

Producers “sell” their project and concept to a team of investors. You’ll assemble a creative team to help pitch your idea to different companies and studios during this process.

The next step is to find a director and team of writers to make your film a reality. At this point, you try and land some big-name actors to play the lead roles and drum up attention for your film.

Congrats! You’ve secured funding and landed some A-list celebs to star in your film.

Now starts the fun and rigorous task of producing a motion picture. Here are some of the major responsibilities you’ll need to coordinate throughout the production process.

As overwhelming as the movie producer’s job description sounds, it also puts you in control of all aspects of the film. This guarantees that your creative vision becomes a reality, on time, and under budget.

After production ends, your job as a movie producer doesn’t.

It’s time to market your movie! Post-production involves everything from advertising to public relations, distribution, and finally, the much-anticipated release.

Required Skills and Training to Become a Movie Producer

Are you excited about the prospect of becoming a movie producer? Are you eager to work side-by-side with famous actors, creative minds, and talented directors?

Before you get started, you need a certain level of experience. Most producers work in the entertainment industry for several years before moving into a more front-and-center role.

Some producers break into the industry as writers, directors, or studio executives, while others start as actors.

It doesn’t hurt to have some education under your belt as well. A degree in business or film can help catapult your career and give you much-needed behind-the-scenes knowledge about the movie industry.

A combination of hands-on experience on-set and education helps build the foundation for a successful career as a movie producer.

In addition to a love of film and the right experience, you’ll need certain personality traits to succeed as a movie producer. The film industry is fast-paced and, in some ways, ruthless.

A strong passion and desire for making films is a good start when pursuing a career as a movie producer. Most movie junkies know a thing or two about what makes a film compelling and engaging.

While you’ll need more than just a love of movies to succeed, your passion is what will keep you going when times get tough, or things don’t go as planned.

Producers oversee the entire production team, which means managerial skills are a must. It would be best if you also were detailed-orientated and organized.

Problem-solving skills are a must. Movie sets are unpredictable. It would be best if you were skilled at thinking on your feet, adjusting to last-minute changes, and finding creative solutions.

Without these skills, production can stop in its tracks.

Sometimes, succeeding in Hollywood is all about who you know. The ability to network and build working relationships across the industry will give your film the attention it deserves.

You’ll need strong interpersonal skills to create these contacts and communicate effectively with your team. Persuasiveness is another great attribute as you compel investors and actors to believe in (and invest in) your vision.

It would be best if you also had persistence and drive to see your production through to the end.

Does the thought of breaking into Hollywood as a high-paid movie producer seem impossible? While it’s difficult, it’s attainable with the right mindset, experience, and personality.

According to the Bureau of Labor and Statistics, the employment rate of movie producers is projected to increase 12% from now until 2026. This is faster than the national average for all other occupations.

The salary of movie producers is a bit harder to define. On average, producers bring in around $65,000.

If you’re just starting out, expect it to take several years before you make three figures.

Are you ready to make a name for yourself in the film industry?

While your passion and love of movies might need to be your driving force to start, you can make it a lucrative and satisfying career in time.

Movie producer jobs are on the rise. With nearly 1,000 movies released each year, Hollywood is ready and waiting to welcome up-and-coming talent like you.