By Jordan Fabel •  Updated: February 22, 2022  •  6 min read  •  Animals
Approved Course is reader-supported. If you buy through links on our site, we may earn a small commission.

When you have a love for animals, becoming a zoologist or a wildlife biologist makes a lot of sense. These two career paths are found in the animal sciences area. Both work with animals and have some similarities. 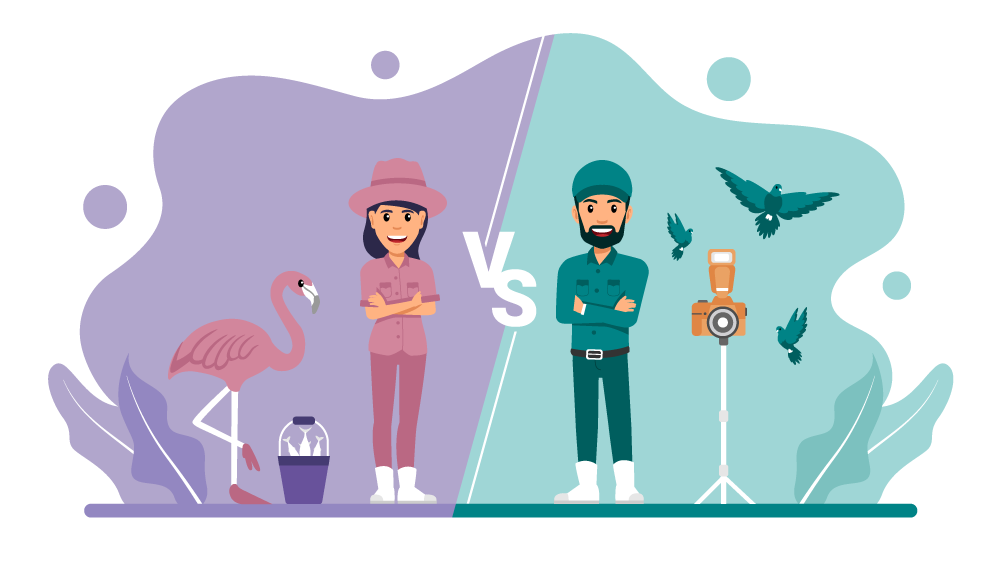 What is a Zoologist?

If you become a zoologist, you will study animals. You may specialize in an area specific to a type of animal, such as mammals, reptiles, or another group. Some of the common job duties of a zoologist include:

These job duties are common to a zoologist. You might work for an academic institution or the government. It’s also common to spend a large amount of time working in a lab.

What is a Wildlife Biologist?

These job duties are very common to this type of career. When you become a wildlife biologist, you will likely do a decent amount of travel. You will have to travel to the natural environment and you may work long hours during your trips.

Zoologists tend to spend more time looking at the characteristics and traits of the animal. On the other hand, a wildlife biologist will look at how the animal interacts with plant life, climate, and other elements within the environment.

Both of these careers observe patterns in animals, collect data, and conduct research. However, they take on different duties and work in different environments. While a zoologist may work in a zoo, a wildlife biologist will likely work in the natural habitat of the animal. Both may spend a decent amount of time working in a lab environment, too.

These two careers are rather general. Most scientists going into either area will specialize in one of the following:

There are many different specialties to consider if you become a zoologist or wildlife biologist.

The education you will need for either of these careers is pretty similar. You will need to earn a bachelor’s degree first. Commonly, you will get this degree in zoology, ecology, biology, or wildlife biology.

While some career options are available once you get a bachelor’s degree, an advanced degree is often necessary. A master’s in zoology or wildlife biology can help qualify you for a research career. You can even go further and get a doctorate in your field if you want to work for a university.

It’s also common to complete an internship in either of these areas. It will likely be a part of your school degree program. If you go on to specialize, you may need additional training, too.

Where do Zoologists Work?

It’s common for a zoologist to work as a part of a research team or independently. They may be employed by several different facilities including:

Zoologists spend time working in an office environment, outside, and in a lab.

Where do Wildlife Biologists Work?

If you become a wildlife biologist, you will likely work with a team of scientists. You might work for a university or a private office. It’s also common to work in a research facility.

Wildlife biologists commonly work in the lab. They will also travel to and work in the natural habitat of the animals they are studying.

Salary of a Zoologist or Wildlife Biologist

According to the U.S. Bureau of Labor Statistics, the average salary for a zoologist or wildlife biologist is about $66K per year. They state that the job growth for these positions is about 5% over the next ten years. Both zoologists and wildlife biologists are put into the same category with this source.

However, according to Salary.com, zoologists can earn a median salary closer to $76K per year. The range from this source goes from about 449K per year to over $109K per year specifically for zoologists.

Indeed.com states that the average salary for a wildlife biologist is around $69K per year. Top employers pay more than $74K per year, with some close to six figures.

While both careers tend to have similar salary ranges, it’s common for a zoologist to make a little bit more than a wildlife biologist.

Choosing to Become a Zoologists or Wildlife Biologist

It’s not easy to make the decision between these two careers. Take the time to do your own research and look closer at both of the options. Then, you can make an informed decision about your career.